Open additional form fields for input with one of these methods

When spreadsheets are converted to web pages, all cells are locked for input except those required to use the form or calculator. For forms, you may want to unlock additional fields for input, e.g. text fields that aren’t used in any calculations.

SpreadsheetConverter makes a clear distinction between these types of cells:

SpreadsheetConverter can automatically guess what cells in your worksheet you want to open for user input on the converted web page. It does this by looking at your formulas and seeing what cells they take their input values from.

The settings for input cell designation

The settings for input cell selection are on the Workbook tab in the task pane.

Switch to the SpreadsheetConverter ribbon 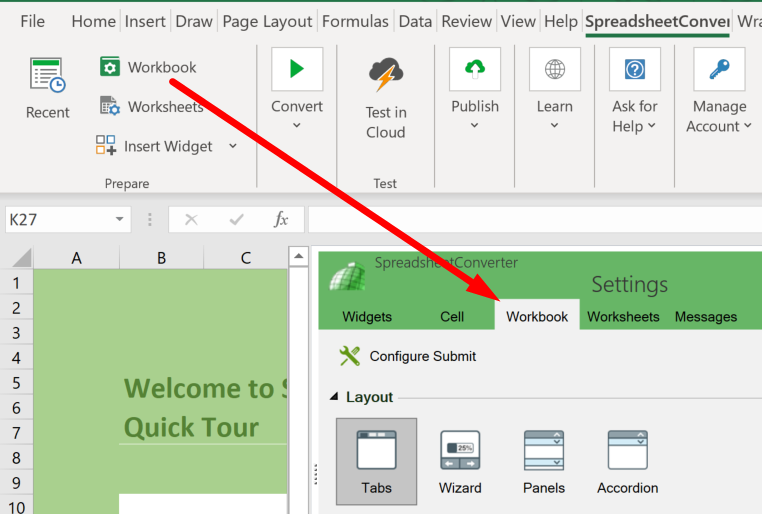 On the Workbook tab in the task pane, locate the Input Cells settings.

With automatic detection, cell types are assigned like this:

Some input cells may not be obvious to SpreadsheetConverter’s automatic detection. If you are designing a form, you may want certain cells in the form to contain plain text input, e.g. address fields that you just want to be forwarded with the form when it is submitted.

If you need to open a large cell range in the spreadsheet for input, it may be tedious to insert many Text widgets. In this case, it’s much quicker to use a special background cell color for the cells you want to open for input from the user. During conversion, SpreadsheetConverter locks all cells except the cells with the selected background color.

Before conversion, select Cell color for Input Cells selection on the Workbook tab. Then click on one of the cells that have the selected background color. 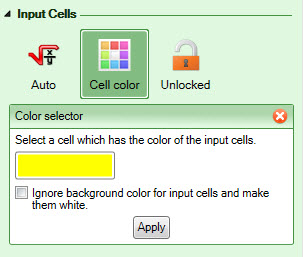 If your spreadsheet uses Excel’s built-in protection mechanism for locked cells, you can also use it to explicitly unlock input cells. You must unlock all input cells, also the ones referenced by your formulas, since they will not be opened automatically.

Select Unlocked for Input Cells selection on the Workbook tab. Remember to unlock the worksheet before conversion!

Some of our tutorials partly focus on opening cells for input: